January 10, 2019
We recently received a catalog in the mail that contained a selection of Carhartt jackets, among other items.  Tim liked the look of this one: a sort of classic, basic mens' work jacket: 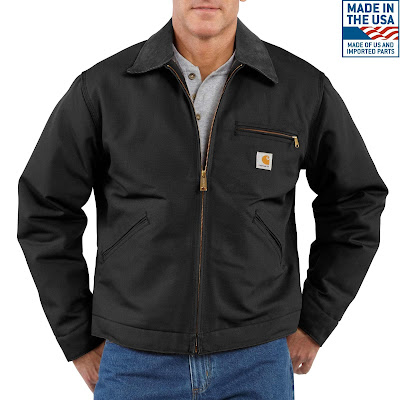 So of course he asked if I could make him one!  He has a couple of handmade coats (a faux shearling from a few years ago and a Goldstream peacoat I made in early 2018) but wanted something a little more casual for everyday - but also warm enough for Syracuse winters.

I found my fabrics first: Carhartt Expedition canvas from The Rain Shed with a faux shearling lining (from my stash, originally from Mood Fabrics.) For extra warmth, I tried something new: interlining the shearling with Thinsulate! I ordered a swatch set from the Rain Shed and chose CS100. The website information claims that "the Polyolefin microfibers trap body head and keep you warm even in damp conditions because its fibers absorb less than 1% of their weight in water." OK then! 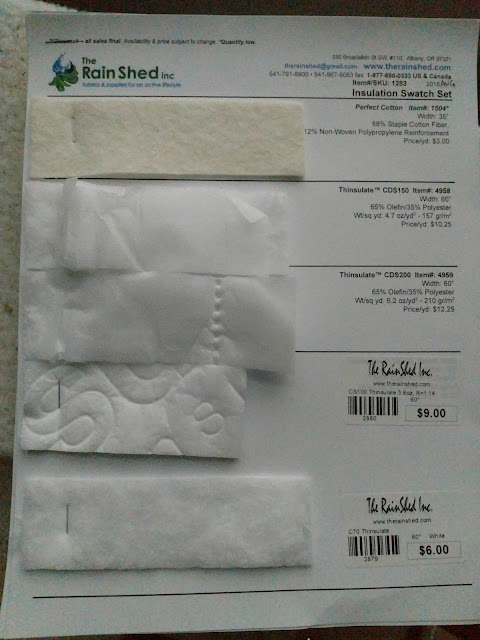 I couldn't really find a pattern I wanted - I hoped Etsy would yield some vintage men's work jacket patterns but no luck.  I decided to try McCalls 7638, in part because it was meant to be lined with something warm, so I hoped the sizing and proportions would be a good place to start. 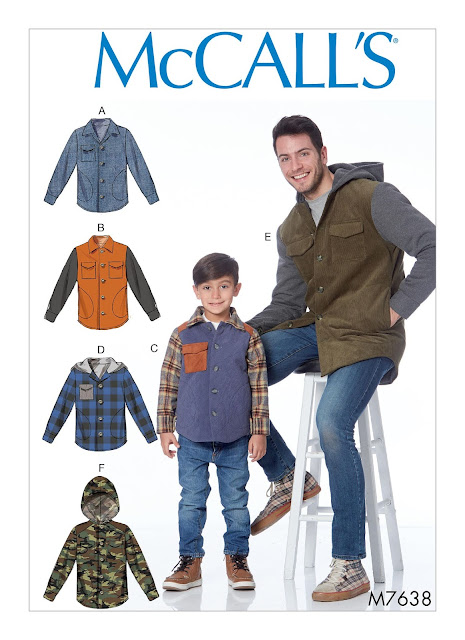 I cut a size M, view A.  I made the following modifications:
- welt pockets instead of inseam and patch pockets
- front zipper instead of buttons
- shortened and squared off the shirttail hem

It's a pretty straightforward pattern with only a few pattern pieces and it went together quickly, especially after the $%&@ welt pockets were on😉

I machine basted the Thinsulate to the shearling. The sleeves are lined with Kasha satin (also underlined with Thinsulate) instead of shearling for easy on-off (a lesson learned from lining the sleeves of the peacoat with flannel...) 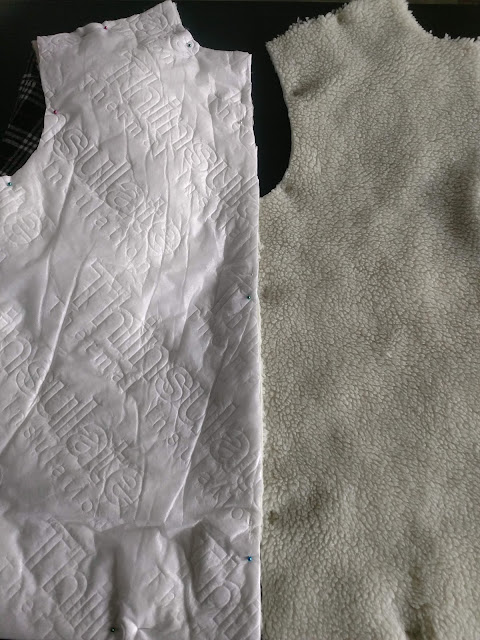 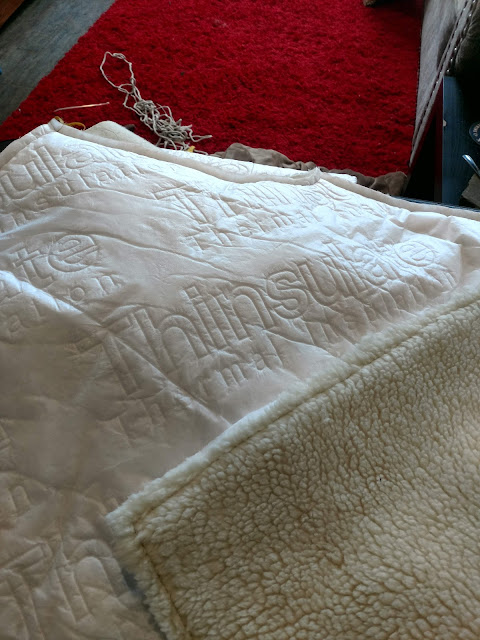 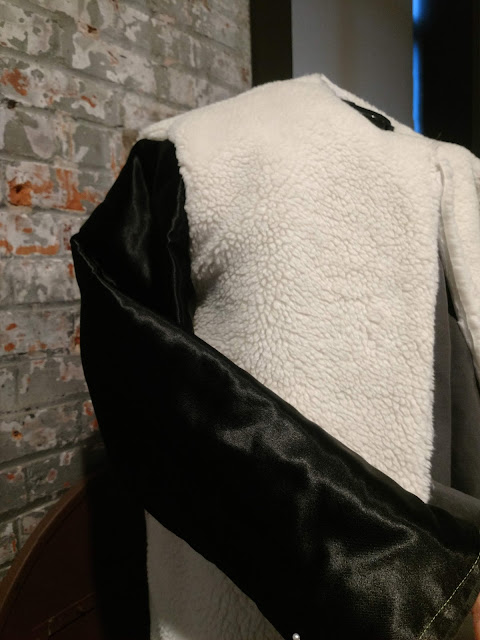 The shearling was very high quality and easy to work with, with very little shedding, which was excellent.

I trimmed off the facing from the coat front and sewed it to the lining, so that when I attached the zipper it would be sandwiched between two layers of canvas, instead of having the shearling directly next to the zipper. I also interfaced the center front to support the zipper. I bought a 24" zipper and shortened the coat to match, chopping 3" off of the original length.  And that's it!  It was a bit bulky sewing the lining to the coat but no complicated construction elements, really.
Photos!! 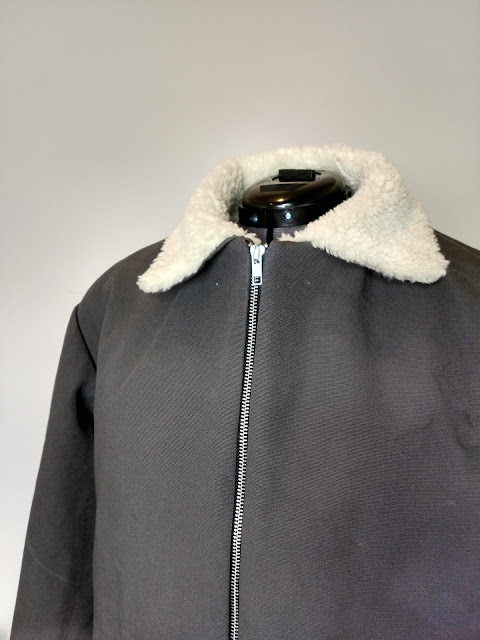 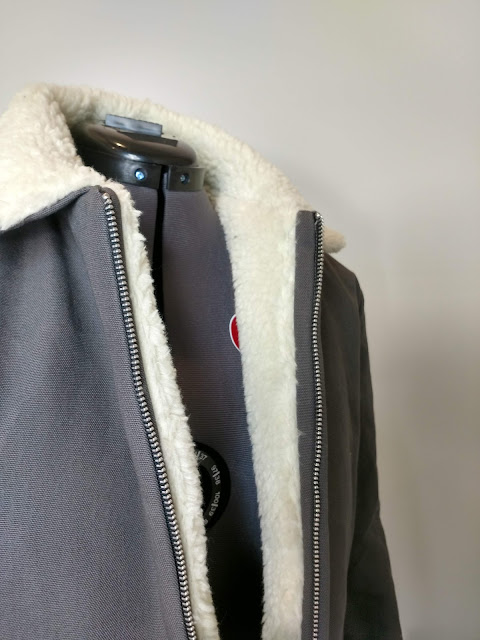 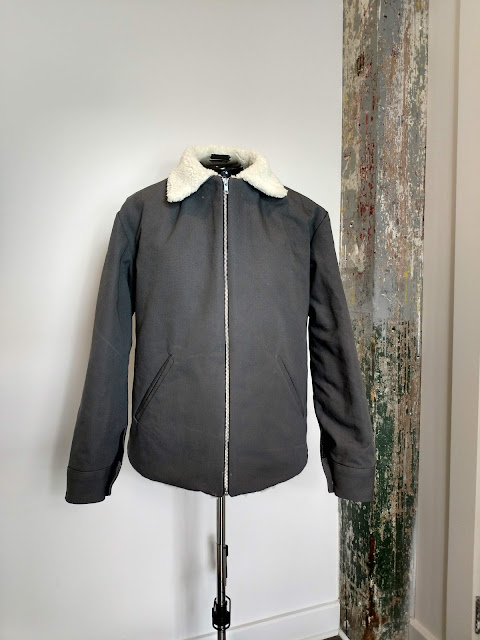 I almost want one for myself! Tim loves it, and says it's quite warm. He has plenty of winter left to see just how warm and dry it really is. 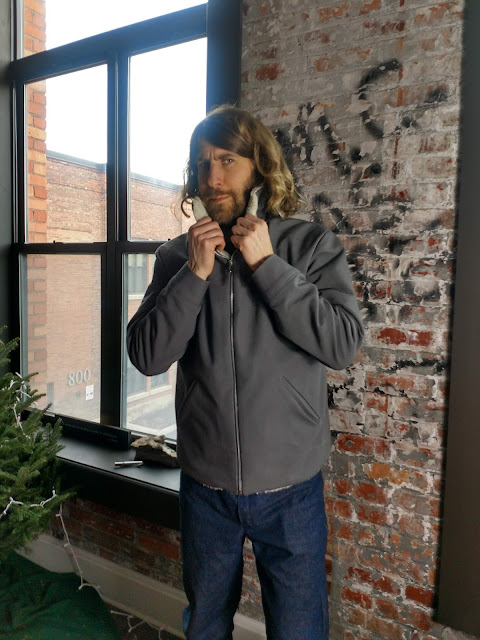 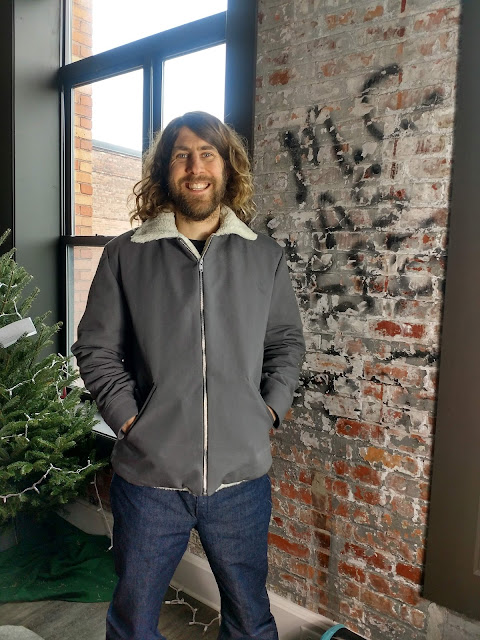 I really liked this pattern and would definitely recommend it and sew it again, if needed! I'm actually thinking about making another and sewing all of his novelty patches on it. I still have more shearling and some leftover Thinsulate, as well as some different shades of Carhartt canvas in my stash. 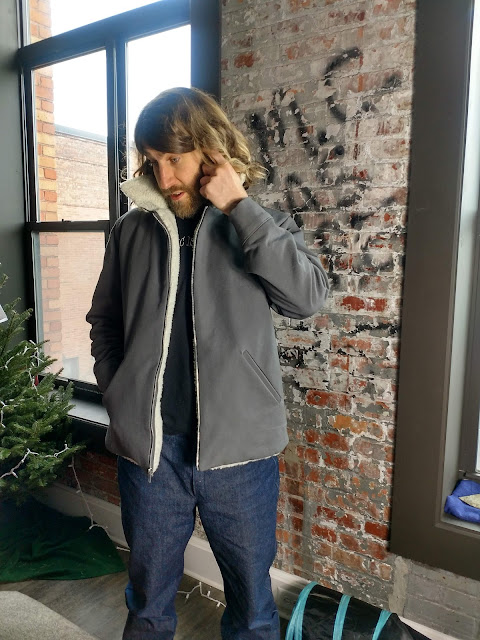 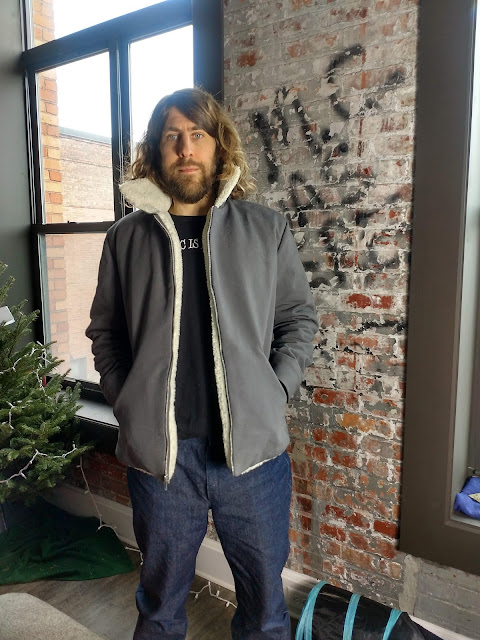 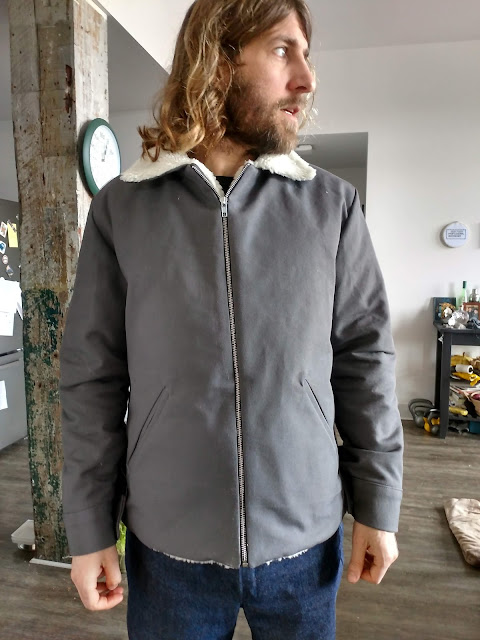 Sometimes projects don't turn out the way I imagine them in my head - but when they do, like with this jacket, it's so satisfying (and makes old frustrations worth it!)
Happy Sewing in 2019!

Popular posts from this blog 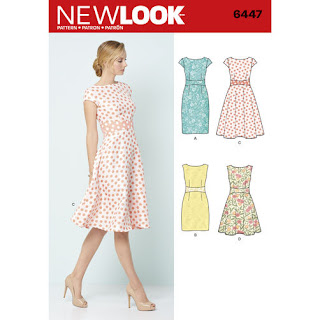 Every summer I plan to sew up a bunch of cute casual dresses, and then, I just don't.   They aren't always as practical for work (somedays I need more mobility than a dress allows, so I frequently wear a knit top/skirt combo this time of year, or one of my many Lady Skater dresses), excuses excuses.  When I first started sewing I made a bunch of dresses that I don't get to wear very often (Icing v Cake I believe the sewing world calls it).  I've been really into making pieces that I will wear daily.  But last weekend I went thru my pattern and fabric stash and made New Look 6447.
I made View D, sleeveless and above the knee.  I like dress patterns with a midriff piece because I find it's easier to fit if you tend to grade between sizes in the upper and lower body, which I often do. Although I cut a straight 12 this time and it fit pretty much perfectly.
I used some Cotton & Steel octopus cotton lawn that I bought last year.  Black is usually the only neutral th…
Read more I was beyond excited when I saw that Ron had listed Carhartt canvas in some 20 (20!!) colors on the Cali Fabrics site.  If you aren’t familiar with the brand, Carhartt is known for high-quality, premium-yet-affordable workwear in sturdy fabrics like denim and duck (aka, canvas). You may have seen their recent feature in Threads magazine, with a tutorial for the Detroit cuff. I knew this would be fantastic quality canvas and Cali Fabrics has it at a great price and it’s 69” wide!

So, the fabric: the description online is very accurate. It is a 12 oz. heavyweight but it has a softer hand than you would expect – it isn’t stiff.  I washed it in cold water and tumble dried on low – this fabric really responds to a hot steamy iron especially when it is just a bit damp.  I recommend serging or pinking the edges pre-wash because it will fray a bit. The color didn’t fade or bleed at all and was very saturated and…
Read more